The decay of power quality is one of the principal issues of electrical distribution systems. One of the main reasons for this is the use of non-linear devices like the switching devices and the power electronics converters. Non-linearity leads to detrimental effects on the utility of the power supply, system efficiency, reduction in power factor, etc. The reactive power is increased due to the reduction in power factor and it does not have any contribution in the transfer of energy, hence its compensation is needed. In this paper, the Artificial Neural Network (ANN) and Adaptive Neuro FuzzyInference System (ANFIS) based control methods for a Three-Phase Distribution StaticCompensator (DSTATCOM) are proposed. This is used for compensation of the reactive power along with the current related power quality issues that include harmonics. These control methods are simulated in the MATLAB environment with the help of the SIMULINK toolbox. The simulation results suitably demonstrate the performance of these methods and it is found that source current waveforms with lesser distortion are achieved with ANFIS as compared to ANN.

In this paper, we have used Artificial Neural Network (ANN) and Adaptive Neuro Fuzzy Inference System (ANFIS) control methods to improve the power quality compensation. SRF theory, ANN as well as ANFIS based techniques have shown the satisfactory operation of DSTATCOM. The ANFIS control technique has considerably improved the performance of the DSTATCOM as compared to that of the ANN technique. The ANFIS based technique utilizes both Fuzzy Logic as well as ANN algorithm and provides higher accuracy and lower THD in source current in conditions of varying load. MATLAB simulation along with test results prove the efficacy of the mentioned algorithms. Thus, ANFIS has proven to be more efficient as well as effective method in order to control the DSTATCOM for the improvement of power quality. A considerable change in the THD can be observed as ANFIS reduces the THD obtained using ANN as mentioned above, and thus reduces the effect of harmonics. This is how better results are obtained and the power quality is improved.

Posted by ASOKA TECHNOLOGIES at 22:27

Electric Vehicle (EV) batteries can be utilized as potential energy storage devices in micro-grids. They can help in micro-grid energy management by storing energy when there is surplus (Grid-To-Vehicle, G2V) and supplying energy back to the grid (Vehicle-To-Grid, V2G) when there is demand for it. Proper infrastructure and control systems have to be developed in order to realize this concept. Architecture for implementing a V2G-G2V system in a micro-grid using level-3 fast chargingof EVs is presented in this paper. A micro-grid test system is modeled which has a dc fast charging station for interfacing the EVs. Simulation studies are carried out to demonstrate V2G-G2V power transfer. Test results show active power regulation in the micro-grid by EV batteries through G2V-V2G modes of operation. The charging station design ensures minimal harmonic distortion of grid injected current and the controller gives good dynamic performance in terms of dc bus voltage stability. 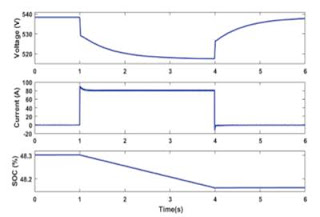 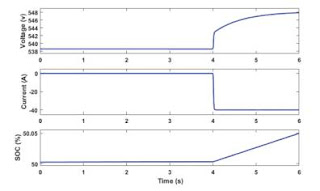 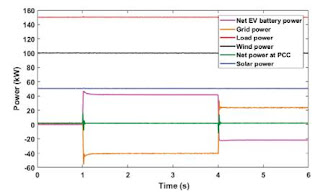 Fig. 4. Active power profile of various components in the system 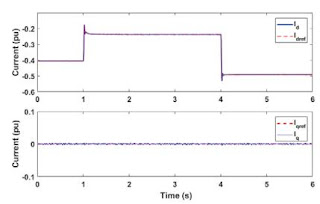 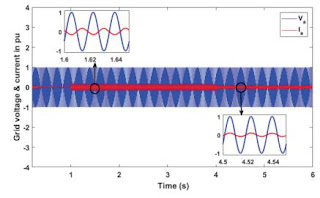 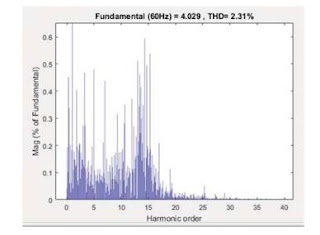 Modeling and design of a V2G system in a micro-grid using dc fast charging architecture is presented in this paper. A dc fast charging station with off-board chargers and a grid connected inverter is designed to interface EVs to the micro- grid. The control system designed for this power electronic interface allows bi-directional power transfer between EVs and the grid. The simulation results show a smooth power transfer between the EVs and the grid, and the quality of grid injected current from the EVs adheres to the relevant standards. The designed controller gives good dynamic performance in terms of dc bus voltage stability and in tracking the changed active power reference. Active power regulation aspects of the micro grid are considered in this work, and the proposed V2G system can be utilized for several other services like reactive, power control and frequency regulation. Design of a supervisory controller which gives command signals to the individual EV charger controllers is suggested for future research.

[1] C. Shumei, L. Xiaofei, T. Dewen, Z. Qianfan, and S. Liwei, “The construction and simulation of V2G system in micro-grid,” in Proceedings of the International Conference on Electrical Machines and Systems, ICEMS 2011, 2011, pp. 1–4.

Posted by ASOKA TECHNOLOGIES at 00:45

Maximum power point tracking (MPPT) is a technique employed for with variable-power sources, such as solar, wind, and ocean, to maximize energy extraction under all conditions. The commonly used perturb and observe (P&O) and incrementalconductance (INC) methods have advantages such as ease of implementation, but they also have the challenge of selecting the most optimized perturbation step or increment size while considering the trade-off between convergence time and oscillation. To address these issues, an MPPT solution for grid-connected photovoltaic (PV) systems is proposed that combines the golden section search (GSS), P&O, and INC methods to simultaneously achieve faster convergence and smaller oscillation, converging to the MPP by repeatedly narrowing the width of the interval at the rate of the golden ratio. The proposed MPPT technique was applied to a PV system consisting of a PV array, boost chopper, and inverter. Simulation and experimental results verify the feasibility and effectiveness of the proposed MPPT technique, by which the system is able to locate the MPP in 36 ms and regain a drifting MPP in approximately 30 ms under transient performance. The overall MPPT efficiency is 98.99%. 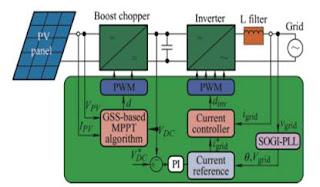 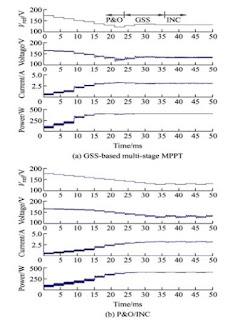 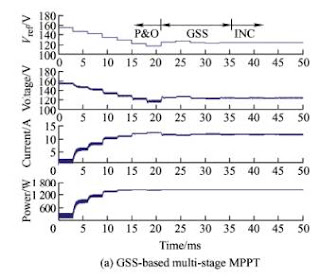 Posted by ASOKA TECHNOLOGIES at 00:40

Medium voltage DC(MVDC) system is considered as a promising technology to improve the efficiency and power density of electric aircraft propulsion(EAP) drives. To adapt to the MVDC voltage level and achieve high drive performance, a five-levelactive neutral point clamped(5L-ANPC) inverter consisting of three-level ANPC and flying capacitor circuits is investigated, which possesses higher voltage capability, lower output harmonics, as well as mitigated dv/dt and common-mode voltage. To fulfill the requirements of high-speed operation and pursue further enhanced efficiency and power density of the inverter for the next-generation EAP drives, Silicon Carbide(SiC) semiconductor devices are considered for implementing the 5L-ANPC inverter. However, the large commutation loops associated with certain switching states of the inverter lessen the benefits of configuring all the switches as SiC devices. As a result, a hybrid Si/SiC 5L-ANPC inverter is developed with a synchronous optimal pulse(SOP) width modulation strategy for controlling the switches in cell 2 and finite-control-set model predictive controller(FCS-MPC) for those in cell 3 of the inverter. Consequently, in the proposed topology, the SiC devices are merely used for the high-frequency switches in cell 3 and the rest of the low-frequency switches are configured with Si IGBTs. This Si/SiC hybrid ANPC inverter concurrently provides high efficiency and low implementation cost at high-speed operation mode. Simulation and experimental results are provided to verify the effectiveness of the proposed hybrid inverter. 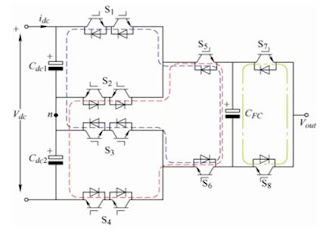 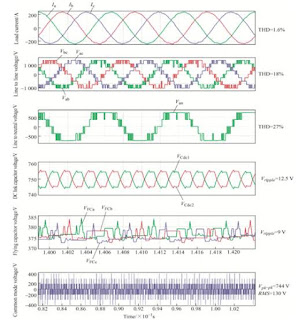 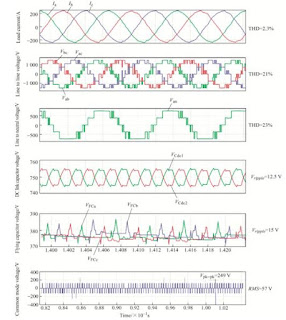 A three-phase Si/SiC hybrid 5L-ANPC inverter for electric aircraft propulsion drive applications has been presented in this paper. To simultaneously attain higher efficiency and low implementation cost, only the cell 3 of the inverter has been configured with SiC devices, while the rest of the switches are designed with Si IGBTs switching at lower frequencies. Furthermore, to overcome the issue of large commutation loops with the switches in cell 2 and also pursue further loss reduction, synchronous optimal PWM has been applied as a low frequency modulation method. Both thermal and electrical simulation results have been provided to demonstrate the effectiveness of the proposed inverter and the related PWM strategy. Experimental Results have been presented to demonstrate the efficacy of the hybrid “SOP+MPC” modulation method. Test results have verified the performance of the proposed method and the fact that this hybrid inverter topology provides high efficiency and low output harmonic distortions at low cost.

Posted by ASOKA TECHNOLOGIES at 00:37

This paper proposes a simple single-phase new pulse-width modulated seven-level inverter architecture for photovoltaic (PV) systems supporting home-grid with electricvehicle (EV) charging port. The proposed inverter includes a reduced number of power components and passive elements size, while showing less output-voltage total harmonic distortion (THD), and unity power factor operation. In addition, the proposed inverter requires simple control and switching strategies compared to recently published topologies. A comparative study was performed to compare the proposed inverter structure with the recent inverter topologies based on the number of components in the inverter circuit, number of components per output-voltage level, average number of active switches, THD, and operating efficiency as effective parameters for inverter performance evaluation. For design and validation purposes, numerical and analytical models for a grid-tied solar PV system driven by the proposed seven-level inverter were developed in MATLAB/Simulink environment. The inverter performance was evaluated considering grid-integration and stand-alone home with level-2 AC EV charger (3–6 kW). Compared with recently published topologies, the proposed inverter utilizes a reduced number of power components (7 switches) for seven-level terminal voltage synthesis. An experimental prototype for proposed inverter with the associated controller was built and tested for a stand-alone and grid-integrated system. Due to the lower number of ON-switches, the inverter operating efficiency was enhanced to 92.86% with load current THD of 3.43% that follows the IEEE standards for DER applications.

Figure 1. Circuit configuration of solar PV system in integrated with the grid and EV loads via the proposed 7level-inverter.

Figure 6. The reference and actual injected currents of the seven-level inverter at irradiance variation.

Posted by ASOKA TECHNOLOGIES at 00:33